The Zeo sleep coach: EEG-based hypnograms for the masses

You can’t do math if you can barely keep your eyes opened. While improving sleep quality can increase your science productivity, this is easier said than done. The famous number theorist Erdös once said that a mathematician is a machine that turns coffee into theorems, and it is well known that he abused amphetamines himself; apparently, he’s not the only one, according to the New Yorker. While stimulants such as coffee and nicotine can have nootropic effects, they also have deleterious effects on sleep; finding out a good compromise is tricky. Lack of exposure to natural light is a common issue in labs. There has been an explosion of research on the negative effect of artificial light (especially at shorter wavelengths) on circadian rhythm regulation via melanopsin photoreceptors. Physical activity and eating habits all factor into sleep quality as well.

A couple of iPhone apps have popped up that claim to track sleep patterns through accelerometer readings, a technique called actigraphy. While actigraphy is a scientifically sound way of tracking wakefulness, there has not been any research regarding the efficacy of the iPhone implementations, AFAIK. The Zeo sleep coach instead uses a dry electrode in a headband and reports voltage readings wirelessly to an alarm clock which collects the data. Of course, EEG is commonly used in sleep labs to create hypnograms. The electrode is positioned over the frontal lobe and near the eyes, so it receives both shitty EEG and oculomotor spikes. It samples the data at 128 Hz and there’s software in the alarm clock that computes a spectrogram, and, using a black-box classifier trained on multiple subjects in a sleep lab, records a hypnogram. The data can be read on the alarm clock or transfered to a computer via an SD card. 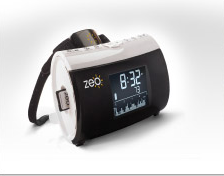 It sounds pretty legit. For one thing, there’s a serial port on the back of the clock that can be connected to a computer whose output can be read through a Python library, allowing electrode readings in real time. They also offer an alternative firmware for the clock that allows the hypnogram to be read in Java (it removes the proprietary encryption scheme). Kudos to the company for allowing people access to the raw data. They’ve also presented posters at a couple of conferences (nothing peer-reviewed through) that show fairly good agreement between the system and visual scorers based on polysomnigrams. I do think that the accuracy of the device could be increased by adding an accelerometer in the headband (combined EEG and actigraphy); users have reported that it had trouble distinguishing REM and wakefulness, which would presumably be easier to track with a movement detector.

Nevertheless, the data that is there can certainly be of some use in increasing sleep quality, and the device is pretty cheap at 200$. I’m especially intrigued by the “Cause and Effect” analysis offered on the Zeo website which regresses user-reported activity (caffeine intake, exercise that day, etc.) against their ZZZ score (a scalar measure of sleep quality per night derived from the hypnogram). I received mine a couple of days ago, and might post an update on the experience.