Connectomics and some of its promises made news last week when Sebastian Seung and Tony Movshon went head to head in a debate broadcast by Radiolab (archived here). I didn’t watch the webcast, but I wanted to point out a quite fascinating recent study by Briggman, Helmstaedter and Denk (2011) that shows some of the promise of this approach in studying the retina. It might well have been mentioned in the webcast given that Sebastian Seung wrote the News & Views accompanying the article.

Direction-selective ganglion cells (DSGCs) were discovered almost 50 years ago by Barlow. These cells, which exist in the retina of lower mammals, are selective for specific directions of motion, much like neurons in V1 and MT in primates. DSGCs receive excitatory input from bipolar cells and inhibitory input from starburst amacrine cells (SACs).

SACs are pretty fascinating. They themselves are direction selective. What’s more, they’re direction selective at a smaller scale than a single neuron. What’s that you say? Well, basically these SACs have dendritic fields which are relatively flat and almost radially symmetric (above). Each dendrite is relatively electrically isolated from the other. Incoming synapses occur all over each dendrite, while output synapses (towards DSGCs) are restricted to the parts of the neuron most distal from the soma. Each dendrite is selective for a motion vector going from the soma to the most distal part of the dendrite.

In other words, as a whole (and as can be measured at the soma) each SAC is selective for expansion motion, with each dendrite being selective for one of the motion directions underlying the expansion pattern. But it still remains unclear how the pattern of connections from the starbust SACs to DSGC ganglion cells drives their direction selectivity.

Briggman, Helmstaedter and Denk performed both two-photon imaging of mouse retinal slices and serial-block electron microscopy of the retinal slices. This allows both functional characterization of the receptive field properties of the circuitry and high-resolution mapping of the form of each cell within the volume and its connections. You can see the idea above. In a, the direction tuning curves for several ganglion cells are shown, grouped into four directions and color corded. In b, which shows calcium imaging results, DSGCs with these direction selectivity preferences are highlighted in color. In c, the same volume as in b is imaged through electron microscopy. EM is very high resolution, so that block in C contains billions of voxels; this information can be used to trace synapses between cells.

This is not a technique for the faint of heart. The authors inform us that one of the raw volumes imaged, corresponding to 60 by 350 by 300 microns, is 3584 x 21658 x 13000 voxels large. By my calculation, at 8 bits per voxel, that means the raw dataset takes up one terabyte. How these guys managed to stitch together the relevant images and trace the processes and synapses is the subject of a later paper by the same authors. But basically, it’s blood, sweat, tears, and supercomputers. The software they used for the purpose is available online.

Using this technique, they confirmed that, as suspected, SACs make extremely specific synapses to DSGCs, and that’s what allows them to become directionally selective. So basically, each DSGC receives non-specific excitatory input from bipolar cells. In addition, it receives highly specific inhibitory input from SACs corresponding to the OFF direction of the cell. Below, you see all of the dendrites of a SAC, as well as the direction selectivity of the post-synaptic DSGC, color-coded at the position of each synapse. Note how specific the connections are. 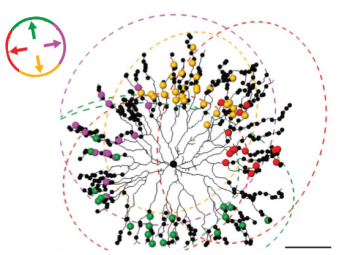 This might not seem particularly surprising, but it’s actually not trivial. You see, in addition to GABA-ergic inhibitory output, SACs can make acetylcholine excitatory synapses onto other cells. What the role of this excitatory output is, nobody knows, but some have suspected that it can be used to enhance directional selectivity in DSGCs in a push-pull fashion. Based on EM reconstructions, this appears highly unlikely; each DSGC appears to get synapses from SACs only from the OFF direction, not the ON direction.

Great stuff, but holy molly that’s a lot of work for a pretty straightforward result.

xcorr is the blog of Patrick Mineault, neuroscientist and technologist. I’m looking for a postdoc in Montreal.

Previously, I was a BCI engineer with Oculus and a software engineer at Google. I was a postdoc at the Ringach lab at UCLA studying vision. I did my PhD at the Pack lab, McGill University.