A lot of studies have popped recently that look at duration of spikes in an attempt to determine whether the measured neurons are inhibitory or excitatory. Thin (fast) spikes are identified with putative inhibitory interneurons, while thick (slow) spikes are identified with excitatory pyramidal cells. This is grounded in some physiological evidence, yet it still seems a little speculative to determine neuron type solely based on spike duration. 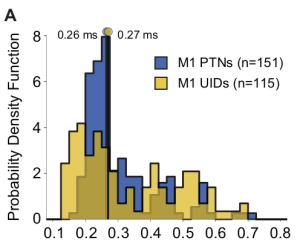 A new study in J Neurosci from Vigneswaran et al. (2011) sheds some doubts on the validity of the spike length/type link. What they did is identify pyramidal tract neurons antidomically in macaque motor cortex. Spike lengths for these neurons overlapped quite a bit with those of the general population (above; UID: unidentified neurons), which includes inhibitory interneurons. In fact many pyramidal cells had spike length smaller than that usually assumed as the threshold for putative inhibitory interneurons. There was a strong link between the antidromic latency and the duration of spikes: shorter latencies mean shorter spikes. Shorter latencies are expected from neurons with larger axons and larger bodies. So it looks like the size of the spike reflects more the size of the neuron than anything else.

The paper’s conclusion is pretty revealing:

In summary, our study confirms for the awake monkey previous findings in the cat motor cortex: thin spikes can originate from pyramidal neurons. It extends this observation to PTNs [pyramid tract neurons] recorded in a secondary motor area. We conclude that spike duration alone may not provide a reliable indication of cell type, at least in areas of primate cortex containing PTNs, but more likely reflects discharge properties shared between cortical interneurons and some pyramidal neurons.