Is it better to use natural or synthetic stimuli to estimate receptive fields? Vargha Talebi & Curtis Baker (who’s on my committee btw) have a new paper out in J Neurosci suggesting that RFs estimated with natural images generalize better to other stimulus ensembles than white noise or flashed bar stimuli. They mapped area 18 simple cell receptive fields with these three stimuli ensembles. They show a pretty stark difference in the quality of cross-ensemble predictions (fit with one ensemble, predict on another) depending on what ensemble was used in the first place, with RFs fitted with natural images generalizing better (their Figure 10, below). This also follows when examining predicted spatial frequency and orientation tuning curves. 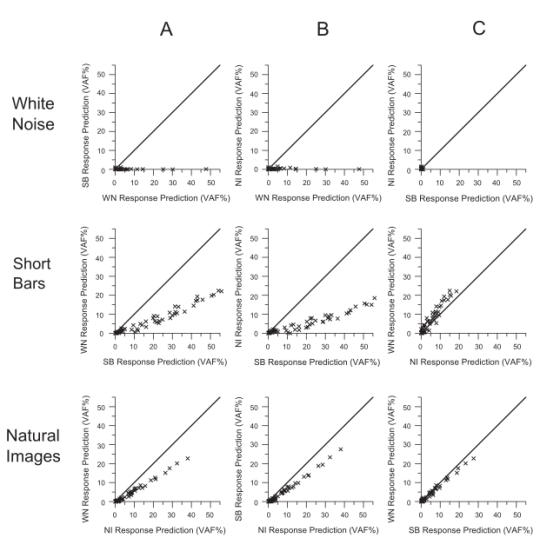 This result is quite surprising, especially since visually the receptive fields look quite similar when mapped with different ensembles. While I think this doesn’t change the main conclusions of the paper, I have a few technical issues with the comparisons. I think it’s important when comparing predictions made with different stimulus ensembles that the comparisons be made apples-to-apples, meaning one stimulus set is not given an undue advantage. The receptive fields where estimated through linear regression, followed by fitting the nonlinearity. The linear regression was regularized through early stopping.

) can be described as such:

Now the optimal maximum-likelihood estimate is of course given by

. For a stimulus ensemble which is white, the initial gradient direction g is in the same direction as the optimal w. Thus in this case the direction of the gradient does not change as more iterations are performed, only its magnitude. In this case, thus, gradient descent with early stopping implements an implicit prior on the magnitude of the weights, and is thus similar to the action of an explicit weight decay prior with a tunable hyperparameter,

On the other hand, if the stimulus ensemble is spatially correlated, as with natural images, the initial gradient will be not be in the direction of the maximum likelihood estimate, since X’X is not a multiple of I. In fact, the gradient in this case will point towards a direction corresponding to highly spatially smooth weights. As the number of iterations increase, gradient descent will slowly correct for this. Thus, in this case gradient descent with early stopping will implement an implicit prior on the smoothness of the weights, and would thus be similar to an explicit smooth prior with a tunable hyperparameter that is slowly decreased as the number of iterations is increased.

Of course smoothness in the spatial domain is a perfectly reasonable assumption, and certainly a more efficent one than a weight decay prior. So in that sense I think the natural images data is given an unfair advantage (unless there’s some technical detail I’m missing).

Another technical issue I have is that the nonlinearity is fit only at the end. There are technical conditions guaranteeing that this will lead to unbiased RF estimates (elliptical symmetry I think), which none of the stimuli ensembles follow. I think it’s possible there’s some sort of interaction between the nonlinearity and RF that would change the RFs if they were fit simultaneously with the nonlinearity, and that this affects the different stimuli ensembles differently. Anita Schmid & Jonathan Victor presented a poster at this SFN which showed different RF estimates depending on stimulus ensembles, and if I remember correctly, the changes in RF were shown to be explainable in terms of an interaction between RF and static nonlinearity.

My intuition is that the two issues would tend to cancel each other somewhat, but it’s still a concern. My final qualm is that since there are contrast gain control mechanisms involved, you should refit the nonlinearity when predicting on other stimulus ensembles, since I don’t think it’s reasonable to think that the threshold and slope for this new ensemble will have the same effective value.

In any case, I’m sympathetic with the conclusions, and I think the results are pretty convincing nonetheless.

2 responses to “Natural vs. synthetic stimuli for estimating receptive fields”