Suppose that a neuron has several discrete internal states, and that it switches slowly, at unknown times, between these states. In the simplest scenario, these states will correspond to its mean firing rate. Such a model is appropriate for the analysis of bistable neurons, which might occur with binocular rivalry data or looking at sleep-wake or on-off states.

, we can write the transition probability going from one state to the next as:

Thus the hidden states are discrete and have the Markov property, hence the name, Hidden Markov Model (HMM). Now it’s possible to outfit the HMM with any type of emission, whether discrete or continuous, and inference remains more or less the same. In our case, if we bin the spike data with sufficiently small bins, there will only be at most one spike per bin. Thus there are only 2 possibly observed outputs, 0 for no spike and 1 for a spike, and what differs in each hidden state is the probability of each output being emitted. Such an HMM with discrete emissions is standard, and you can use Matlab’s built-in HMM toolbox to analyze it.

Here’s an example spike train which switches between two discrete states every 50 samples:

A few calls to Matlab’s HMM toolbox will determine the firing rate in each state and the transition probabilities (“learning”):

The probability that the neuron is in each state, as well as the most likely state are easily found:

And that’s pretty much all there is to it.

By using a standard HMM, we were able to avoid getting into the nitty gritty of learning with HMMs. But there are other slightly more complex  analysis scenarios where you’ll need to do a little more work. In the previous analysis, I assumed that the only thing that is changing inside the neuron is its firing rate. But what if other aspects of its response change as well, like its burstiness or its receptive field?

How can you analyze this? Chapter 13 of Bishop is quite useful here. Parameters of HMMs are typically infered through EM (expectation-maximization). In the E step, you infer the probability that the model is in each hidden state for all time steps. This is done through the forward-backward algorithm. It’s important to understand that this step is basically independent of the emission mechanism. All you need to perform this step is to estimate the probability of the observed data at each time step assuming the model is in state 1 or state 2.

In the M step, we’ll maximize the expected complete data log-likelihood with respect to the model parameters. This sounds scary, but in actuality this involves fitting one GLM per hidden state, with each data point weighted by the probability, computed in the E step, that the data is in the target hidden state. So to be perfectly clear, if the GLM in question was the normal-identity GLM, inference outside the EM context would involve minimizing the sum-of-squared error:

In the context of the M-step, this would be replaced by the weighted sum-of-squares:

Now the E step can be done with generic software. I used the hmmFwdBack function in PMTK to do this step. For the M step, I added a new “weights” option in my GLM toolbox. I filled in the rest by following chapter 13 of Bishop as well as Rabiner (1989).

Here’s some data I generated which simulates a receptive field which changes every 50 time steps:

Here are the two receptive fields it changes between:

Here’s a function that performs EM for this data set:

Call this to perform inference:

And here’s the estimated RFs with the infered states underneath: 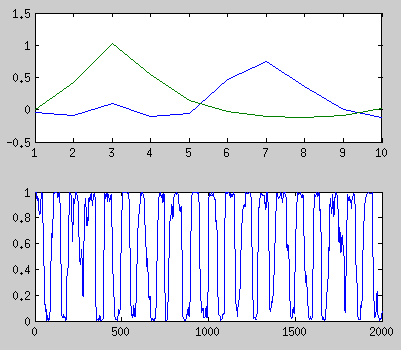 It’s also possible to have the transition probabilities themselves stimulus-dependent. Read more about this in Paninski’s class notes.